Universal Insurance Holdings, Inc. Chairman and Chief Executive Officer Sean P. Downes commented: “In the months since Hurricane Irma made landfall, Universal has demonstrated the true value of our business model. Our comprehensive reinsurance program substantially limited net losses incurred from one of Florida’s largest hurricanes in over a decade, our vertically integrated structure produced various income streams in the months following the storm, and our superior claims handling and catastrophe response teams delivered excellent service to our policyholders, closing claims in a timely and orderly manner. Our underlying results were also strong, highlighted by continued organic growth and underwriting profitability, as we maintained underwriting discipline and adhered to our strategy of producing profitable and rate-adequate business, with meaningful growth in both Florida and our Other States book, and steady expansion of our Universal DirectSM platform. Our balance sheet remains solid. During the fourth quarter we strengthened both current and prior accident year loss reserves, and we believe our loss reserves are appropriately set at current levels. We delivered a 33.0% ROE for the fourth quarter and a 25.7% ROE for 2017, results that validate our unique business model, and we remain well positioned to deliver outstanding value to shareholders throughout 2018 and beyond.”

Direct premiums written grew 12.5% from the prior year’s quarter to $239.5 million, with 9.4% growth in our Florida book and 36.8% growth in our Other States book. Our organic growth strategy within our home state of Florida remains on track, and our organic geographic expansion efforts within our Other States book continue to produce results. We note that fourth quarter 2017 results include an increased level of both new and renewal business within our Florida book surrounding Hurricane Irma, in part related to a temporary emergency order by the Florida Insurance Commissioner suspending policy cancellations and nonrenewals by insurance companies for a period following Hurricane Irma (please see “Hurricane Irma Overview” section for additional details). For the quarter, net premiums earned grew 12.0% to $183.7 million.

The net combined ratio was 77.6% in the fourth quarter of 2017 compared to 95.0% in the prior year’s quarter. The increase in underwriting profitability was driven by both a reduction in the loss and loss adjustment expense ratio and the general and administrative expense ratio.

The effective tax rate for the fourth quarter of 2017 was 37.9%, compared to 39.9% in the prior year’s quarter. The current year’s quarter includes several discrete items, which in aggregate reduced our income tax expense by approximately $0.2 million, lowering the effective tax rate by 0.3 percentage points for the quarter. Discrete items included a credit to income tax expense of $5.0 million for excess tax benefits resulting from stock-based awards that vested and/or were exercised during the fourth quarter, largely offset by a deferred tax asset (DTA) remeasurement of $4.7 million related to tax reform legislation passed in December 2017.

Hurricane Irma made initial landfall in the Florida Keys on September 10, 2017 as a Category 4 storm on the Saffir-Simpson Hurricane Scale. Hurricane Irma was an extremely destructive event that caused a wide swath of damage across the entire Florida peninsula and throughout the Southeastern United States. Although Hurricane Irma was a devastating catastrophic event, the ultimate net financial impact to Universal was substantially limited by both our comprehensive reinsurance program and benefits received as a result of our vertically integrated structure. The initial net loss and LAE reported by the Company in the third quarter of 2017 related to Hurricane Irma was $37.0 million. This amount was partially offset by favorable revisions to ceded losses and LAE of $9.2 million during the fourth quarter of 2017 to reflect recoveries related to our Other States Reinsurance Program. Additionally, our service company subsidiaries generated substantial additional revenues following Hurricane Irma that led to approximately $35.0 million of estimated pretax profit generated by service company subsidiaries during the fourth quarter of 2017. In total, for the year ended December 31, 2017, the Company estimates that Hurricane Irma had an aggregate net benefit on its financial results of approximately $7.2 million on a pretax basis. The discussion below provides additional commentary surrounding the various effects of Hurricane Irma on the Company’s financial results.

Universal Insurance Holdings, Inc., with its wholly-owned subsidiaries, is a vertically integrated insurance holding company performing all aspects of insurance underwriting, distribution and claims. Universal Property & Casualty Insurance Company (UPCIC), a wholly-owned subsidiary of the Company, is one of the leading writers of homeowners insurance in Florida and is now fully licensed and has commenced its operations in North Carolina, South Carolina, Hawaii, Georgia, Massachusetts, Maryland, Delaware, Indiana, Pennsylvania, Minnesota, Michigan, Alabama, Virginia, New Jersey, and New York. American Platinum Property and Casualty Insurance Company (APPCIC), also a wholly-owned subsidiary, currently writes homeowners multi-peril insurance on Florida homes valued in excess of $1 million, which are limits and coverages currently not targeted through its affiliate UPCIC. APPCIC is additionally licensed and has commenced writing Fire, Commercial Multi-Peril, and Other Liability lines of business in Florida. For additional information on the Company, please visit our investor relations website at www.universalinsuranceholdings.com.

This press release may contain “forward-looking statements” within the meaning of the Private Securities Litigation Reform Act of 1995. The words “believe,” “expect,” “anticipate,” and similar expressions identify forward-looking statements, which speak only as of the date the statement was made. Such statements may include commentary on plans, products and lines of business, marketing arrangements, reinsurance programs and other business developments and assumptions relating to the foregoing. Forward-looking statements are inherently subject to risks and uncertainties, some of which cannot be predicted or quantified. Future results could differ materially from those described, and the Company undertakes no obligation to correct or update any forward-looking statements. For further information regarding risk factors that could affect the Company’s operations and future results, refer to the Company’s reports filed with the Securities and Exchange Commission, including Form 10-K for the year ended December 31, 2016 and Form 10-Q for the quarter ended September 30, 2017. 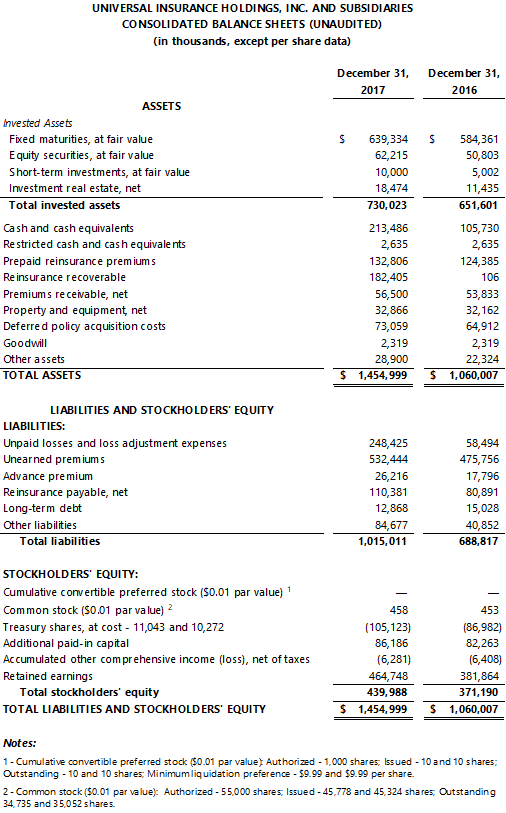 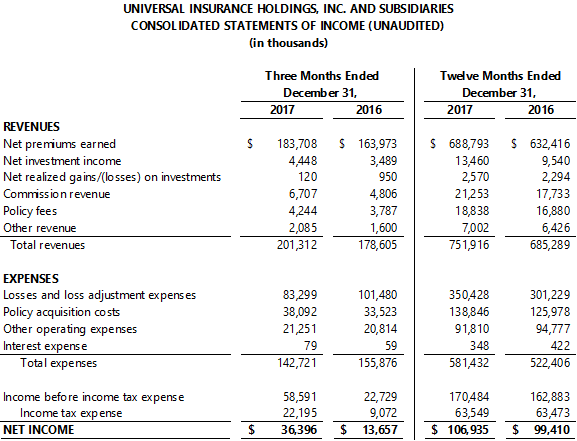 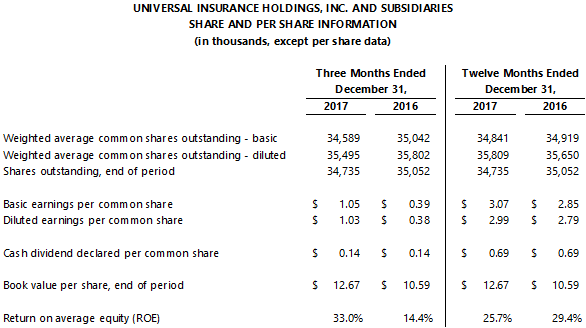 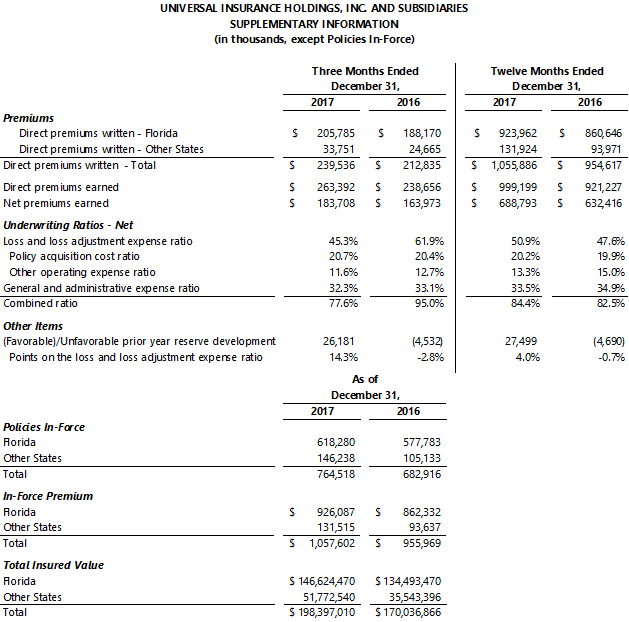